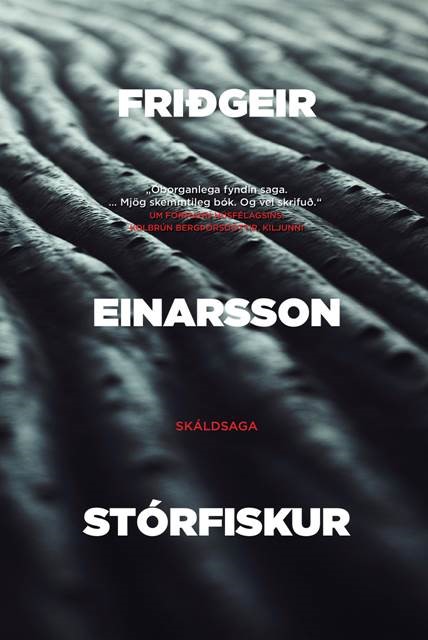 An Icelandic designer, living in mainland Europe with his wife and daughter, is given the task of designing a logo for a well-known Icelandic fishing company. He decides to kill two birds with one stone and returns to his homeland both to get acquainted with the activities of the company and to seek treatment for the debilitating disease he has been diagnosed with. It takes a little longer than planned, partly because the designer spends his stay without a car in a small house just outside Borgarnes.

The writer investigates the controversial whaling industry in Iceland, as well as different ideas about work in contemporary society. The novel deals with big fish and smaller ones, in the sea and on dry land.

Through Frans' [the protagonist] research, the reader gains an intriguing insight into the world of whaling in a wide context, i.e. the reality of those who hunt for whale for a living, the opinions of those who are strongly against whaling, and everything in between. Big Fish is an elegant novel with a strong link to reality. It is subtly funny and flows ostensibly without a hitch

Frans is a profound thinker, he deliberates endlessly and questions everything in his surroundings. He is an amusing and mischievous protagonist, it's easy to sympathise with the poor man. […] Fridgeir is a great writer, the text has a really good flow and his descriptions are authentic and vivid. […] Big Fish is a contemplative and subtly funny novel

This is one of the cleverest books I've read for a long time, extremely funny in a cunning way. The writing style sometimes reminds me of David Sedaris and his autobiographical tales, funny stories of everyday events that give a glimpse into something more earnest. The book was a sheer pleasure to read