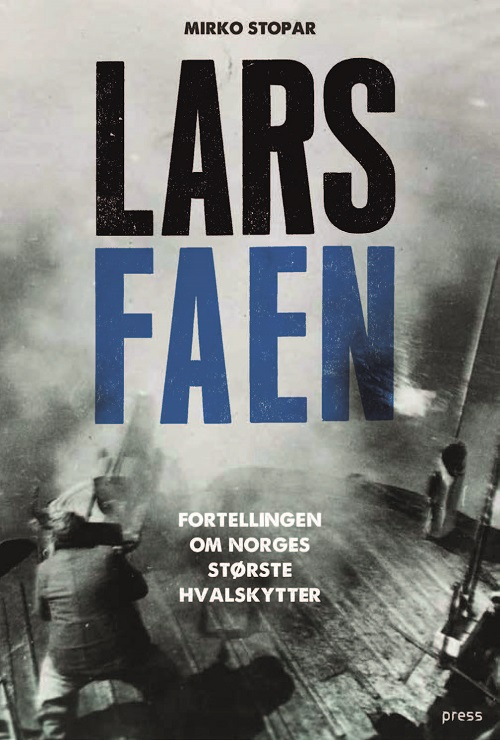 The story of the legendary Norwegian gunner and whaling expedition manager “Lars Faen” Andersen (“Lars the Devil”). Before WWII, Lars Andersen was a folk hero, millionaire and Norway’s most extravagant and famous whaler. He was among other things the first man to dare to catch whales in the Antarctic pack ice before the technologic means for that existed, and the whole industry followed his steps, and as the commander of the “Kosmos” expedition in the early 1930s, he broke catching records that were never surpassed. But Andersen’s popularity fell as he took hire for the Germans in 1937, who paid him a fortune to teach them the art of killing whales. During the occupation of Norway he was a collaborationist, and for that he went to jail and was forced to pay a multimillionaire fine. Andersen was blacklisted and had to exile, and his name got erased from history books. In Argentina he was adviser for president Perón and was hired as expedition manager by the shipping tycoon Aristotle Onassis, who started his own whaling company using the German whalers and fleet that was out of business after the war. Onassis’ whaling broke international laws and caused the British-Norwegian monopolies millionaire losses, what had to be stopped at all costs. And when the evidence of Onassis’s illicit practices was presented internationally, it was speculated whether “Lars Faen” was the informer. Andersen was allowed to make a final comeback in Norwegian whaling as an old man and died wealthy in 1967 in his home town of Sandefjord, with the souls of 7000 whales on his conscience. More than a biography, “Lars Faen” is the exploration of a myth, a story made of greed, obsession and good old fashioned adventure, thoroughly researched and written with a page-turner quality that makes it appealing to a wide audience. Through Andersen’s life and career we’re able to track the pioneering, boom and downfall of the Antarctic whaling, as the story cruises through the Nazi occupation of Norway, cold war intrigues proper of a spy thriller, or revelatory events such as when the whalers themselves began to realize that whale populations were disappearing due to the extensive slaughtering.

Stopar has written a tight story about an extraordinary human being. He writes with personality [...] The book has become an easy-to-read, insightful, lively and physical close impression of the tough conditions into which whaling was performed under”:

‘Lars Faen’ is a surprisingly adventurous story of an individual whose efforts turned into great history and made the world more connected. With a warm and playful pen Stopar gives life to this national hero known to few in modern day Norway.

Mirko Stopar’s ‘Lars the Devil – The Story of Norway’s Greatest Whale Gunner’ is an outstanding story from history. With broad source materials and a series of eyewitness testimonials, he tells the story of a forgotten Norwegian hero and anti-hero. It’s a generous and curious story and Stopar uses his whole register as an artist, author and film-maker to present a complex and lifelike person who both finds and loses their place in history. His underlying tone is one of openness and respect, the language is equally bound up in South American storytelling traditions as it is in European ones, and, by drawing lines between people and events of great significance, and placing them in the context of their time, he lifts a Norwegian tale up into a universal story of greatness and decline. It’s incredibly well done.