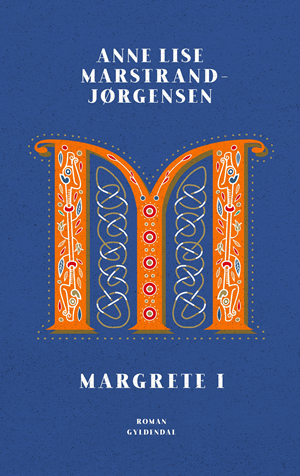 A psychological drama about one of the most significant women of the Middle Ages.
At the age of ten, Margrete married the King of Norway and was sent away from home. She is Valdemar Atterdag’s youngest daughter, born in 1353, and her task in Norway is simple: She must give birth to an heir to the Norwegian throne and link the kingdoms closer together.

When Valdemar dies without leaving a son, there is no obvious successor to the throne. Despite internal strife and the threat of war from outside, Margrete succeeds in having her five-year-old son elected king of Denmark. She rules on his behalf and has a clear vision of the future from an early age: the Nordic countries must unite into one kingdom – and she must take the lead.

The story of Margrete I goes beyond her contemporaries. It is a novel about how a young woman defies the framework of a woman’s life in the Middle Ages and sets out to use her power to create peace. It is a gripping psychological portrait of an unusual political endowment that continues to fascinate across centuries; a story about the medieval Nordic countries, about loneliness and drive, love, faith and superstition

In her great new novel, Anne Lise Marstrand-Jørgensen pulls Margrete I out of oblivion and gives her the royal treatment (…) The book is extremely well written.

In a superb novel, Anne Lise Marstrand-Jørgensen portrays Margrete I as born to power (…) There is magic in the writing. A wild and meticulous style, characterized at once by its pace and intensity.

Five stars for this new novel about the Nordic region's greatest power-woman of all time (…) Anne Lise Marstrand-Jørgensen's 'Margrete I' is made coporeal, with skin and hair, the words bloom like flowers. The nearly 700-year-old regent is brought to life with incomparable language and emerges as a role model for the present day.

I was deeply impressed by Marstrand-Jørgensen's ability to combine medieval Scandinavian history with a moving, interior portrait of the young queen Margrete. The writing is poetic and evocatic, but there is a constant sense of immediacy. We are right there with Margrete as she experiences the sharp contrasts of her existence, its splendor and brutality, its privilege and loneliness, and tries to make sense of a confusing world.

After the much acclaimed literary novels featuring Hildegard, Anne-Lise Maarstrand Jorgensen presents another extraordinary, vivid and riveting psychological drama about an unforgettable medieval woman figure who achieved to ameliorate her own world. We at Sonzogno have been captivated by the story of Margarete I, the ambitious Queen of the North who contributed to bring peace in the fierce, feral, struggling society of her times, becoming an example for humankind until today. A beautiful, sensitive, and poetic voice enhanced by a political touch.