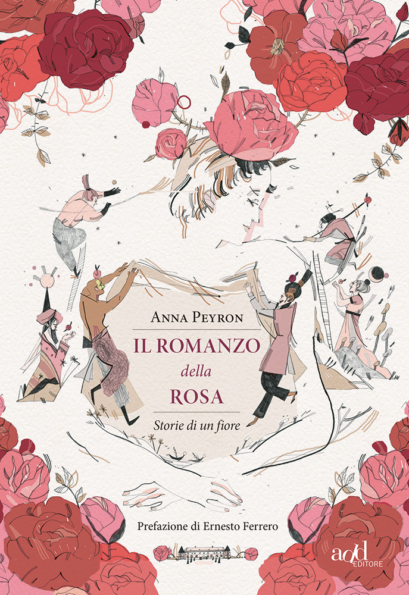 Stories of a flower

The rose first appeared on earth thirty-seven million years ago. This was revealed by fossils discovered in Oregon and Colorado, confirming that different species of roses grew in prehistoric times. These same species can still be found in the northern hemisphere today. The history of the flower, from its origins to the eighteenth century, serves as the prelude to Anna Peyron’s book, which begins on a precise date: 21 April 1799, when Marie Josèphe Rose Tascher de La Pagerie, born into a Creole family of white French settlers in Martinique, bought an estate surrounded by a park. The lady in question was Josephine Bonaparte, and she was buying Malmaison. Here she created a garden that quickly became more famous than her salon, where she intertwined relationships and received emperors and tsars, surrounding herself with landscape architects, nurserymen, hybridisers, botanists, zoologists, chemists, naturalists and mathematicians to help her transform Malmaison, Mala-mansio, once a pirates’ hideaway, into a place of harmony and beauty.

Roses from China were brought in from English nurseries , and from Malmaison disseminated all over the world.
After the fall of the Empire, the aristocracy and the emerging bourgeoisie of Europe and beyond had become impassioned by roses and gardens. New botanists, gardeners and artists created English Gardens, the tsar’s pavilions in St. Petersburg, the park of the Royal Palace of Caserta, and then
the gardens of South Africa, Australia and America, while in more recent times, a rose that was thought to be extinct was found on the island of Alcatraz.
Rose gardens became universal showcases, scientific laboratories and places of entertainment used as a backdrop by artists such as Jean Cocteau, Isadora Duncan and Joséphine Baker.
Through people and places, gardens and fragrances, Anna Peyron reconstructs the story of a great passion, a journey from the nineteenth century to today, spanning “two centuries of roses”.

A journey through two decades seen by persons and places, gardens and perfumes, which traces the history of taste, customs, social relationships, and entrepreneurship (...)
Between essay and novel, with great passion for the rose

The reader, who would not distinguish a lilium from a gerbera, become passionate about the impossible scientific research to produce a blue rose and the more fortunate ones to obtain a rose with citrus-scented leaves; we devote ourselves to the destroyed garden of Countess Marie Henrieta Choteck and reading the attempts of the most famous hybridizers in Europe between restoration and revolution to obtain extraordinary roses, struggle with these.

This noble lady tells a splendid story, in the way that only those with a thorough knowledge of their subject can do. Just listen as she conjures up for us the mysterious widow Pommery, who is not a rose but the person who invented brut champagne, or the Scottish botanist who went to China disguised as a Chinaman to steal some new roses. She tells us how the names of roses came about, and what they say... page after page, you will discover the world's most beautiful roses and gardens.

The rose is a lens through which to bring the history of the world into focus. This exuberant, Tolstoy-like novel unfolds over the centuries and the millennia, peppered with fascinating asides that tell of protagonists and secondary characters, in a constant succession of twists, surprises, declines and returns. The imagination of the nurserymen contributes to its charm: some of the names are like miniature stories, portraits of a lady, promises of rare emotions.

In my opinion, this is an essential book for anyone cultivating a garden that features roses: a few pages are enough to realise that there is nothing overly erudite about it. And the literary aspect, always interesting and delightful, is never far removed from a clearly perceivable gardening matter-of-factness

Reading Il romanzo della rosa is like time-travelling through a flower. The book contains the history, the peculiarities and the extraordinary personalities that have contributed to the regal status of this flower.