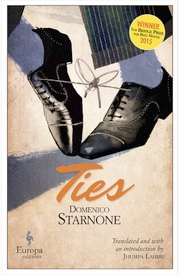 Nothing could be more radical than a breakup. But nothing is more lasting than those invisible ties, the laces that bind peo- ple one to another. An intense, truthful novel about the way we spend our lives breaking vases and glueing together the shards, and the primordial and subterrane- an forces that hold together marriages, long after love has ended.

Sandro and Anna are little more than chil- dren, but it’s been so long since they’ve seen their father that they can barely even re- member him. Four years have passed since he left home, abandoning them to a tempest of impotent rage, rancour, and unanswera- ble questions. The father is in Rome, enam- oured of the tender love of an unknown woman, while they’re in Naples with their fu- rious, solitary mother, pacing out the spread of silence and the growth of estrangement. What remains, when our world crumbles in- to dust? What are we willing to sacrifice, just to keep from feeling we’re caught in a trap? What do we lose, when we choose to re- trace our steps? At times, all it takes is a tiny act, a minor turn of events, to bring back everything we’ve tried to forget and set aside. Like a son who ties his shoelaces the same idiosyncratic way his father did, even though he doesn’t remember ever having learned that method from him. Domenico

Starnone gives us a moving, powerful story, the novel of an escape, a return, of all the failures that have ever been. Reminding us with every page that the time of reckonings is a useless time, absolute, ridiculous, and heartbreaking.