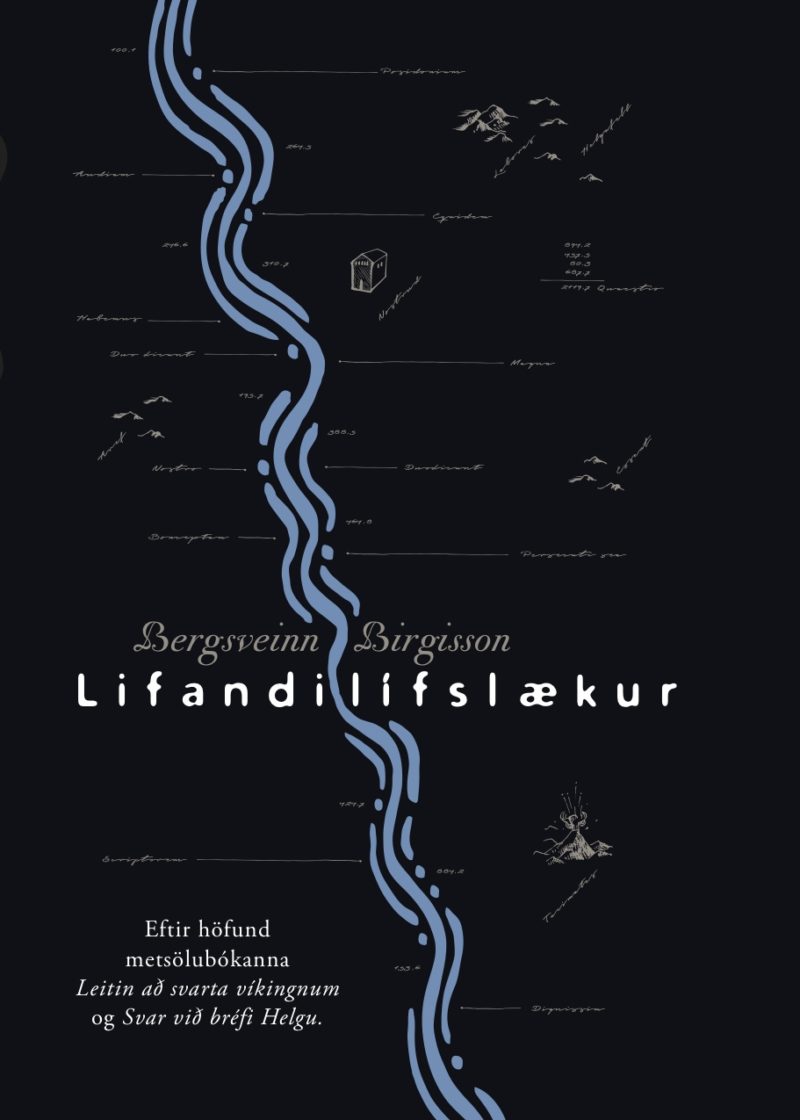 On the far northern, most thinly populated shores of the Westfjords in Iceland flows a little brook that the inhabitants believe to have great healing power. It is said that anyone who drinks one cup of the brook’s water per day, cannot die— which in turn gives the body the opportunity to heal itself. Even now, the brook is still called Vitality Brook.

Lifandilífslækur is about the struggle of a poor nation for the right to its own perspective and views of life, and about the powers of rulers, colonialism, exploitation and the desecration of nature. The work is a historical fiction about a critical moment in the life of the Icelandic people, but also about the moment of truth that the world is facing today. Bergsveinn Birgisson’s work plays out in the borderland between two worlds: the realism and scientism of the 18th century stand opposed to the forces of nature and mysticism. It is hard not to see the work’s reference to modern times, where dangerous dogmatic interests threaten human and emotional intelligence.

In his unique style, Birgisson invites the reader on a journey back through the centuries with the Enlightenment figure Markús Árelíus. The harsh and barren 18th-century Iceland, afflicted by enormous natural disasters, provides an unforgettable backdrop which is conveyed by the author with great sensitivity. Markús Árelíus is sent to windswept Iceland to prepare a report for his superiors in the Danish government, who are considering relocating all useful labour to Denmark and Norway. Equipped with measuring instruments and the passionate consciousness of the Enlightenment, Markús Árelíus travels north to Strandir, where nature refuses to obey his laws and puts his measuring instruments to a hard test.

One of the most interesting, enjoyable, and different
texts that I've read here in a long time.
Bergsveinn Birgisson´s best title.

(...) Bergsveinn Birgisson´s best novel so far (...)
A remarkable story which gave me goosebumps. I feel no need to read a thriller this christmas, having read Vitality Brook will keep me satisfied for a while"

5/5 stars; Vitality Brook will find its way to many readers; this adventorous and well written story deserves it (...) masterfully and powerfully written (...) Incredibly funny!

Beautifully done (...) a fantastic novel (...) will give you goosebumps

Particularly well written (...) hits the right spot for the lover of historical novels

This is the best Birgisson has done so far (...) a grand novelty (...) Warmly recommended

A grand novel.
(…) Vitality Brook is a historical novel, but also something else and much more. By merging the historical together with motifs from folklore tradition and elements of another amazing Icelandic genre, namely the stories of getting lost, BB has staged something difficult to tear away from, where the history of the country, nation and human nature for the previous thousands of years is depicted.

Can you ask for much more than that?

It really is such a masterful and multilayered novel, so beautiful in its recreating of an historic atmosphere and at the same time so absolutely relevant to our times!

A unique novel. Alongside his wealth of knowledge and wit, Birgisson has an impressive ability to play with different styles. From the stylized chancellor language to the most beautiful poetic phrases - in a book that is an astonishing blend of rawness, poetry and harassment.

Lovely mix of absurdities and social tragedy (…) Social indignation is paired elegantly with the absurd, the comical and the grotesque. It is extremely precise and musically performed. «Vtality Brook" is a rich source of both fun and reflection

There are observations, lines and art of writing holding a significant level we are introduced to in the best parts of this novel ... »
Last week Vitality Brook was nominated for the Nordic Council Literature Prize and it will be Bergsveinn Birgisson's second attempt to go all the way to the top. It can succeed

In addition to all of this, Vitality Brook is a seldomly fun, enthralling, and well crafted novel. No matter what medical science tells us, one should never underestimate the healing power of a good story on our mind. There are books like Vitality Brook that prolong life

I devoured the novel, you will look far for better literature than this! (…)
Bergsveinn Birgissons language uses is fantastic, he does not use words, but sensual images that really make me feel that I am present.

Birgisson vividly describes the pristine landscape of Iceland and its destruction by natural disasters. The horror scenario of a destroyed nature with all effects on the survivors and the protagonist Magnus' own questioning whether people who lead a frugal and deprived life may live happier than outsiders is as current today as it was then.

As in "Landscape is never corny", the 49-year-old Icelander Birgisson, who teaches Old Norse literature , tells in his latest novel in a visually stunning language of ancient myths and magical people, whose actions determine being, embedded in poorness and cod, cotton grass and clouds.

The Icelandic author Bergsveinn Birgisson describes his homeland as a counterpoint to the restless pursuit of profit in modern life. His novel "Vitality Brook" about the Danish expedition by a Danish researcher is a historical fairy tale about earth spirits and the inadequacies of science.

As in his first novel "Landscape is never corny" (2018) Birgisson lets wind, weather and water of his overwhelming landscapes indicate the pace and tone of the text. Eleonore Gudmundsson has translated the moving images into rhythmic German again. And in the conflict between reason and fever, Birgisson masterfully plays through the light and shadow of the Enlightenment.