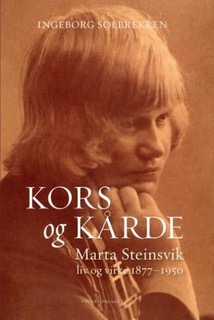 This year will mark sixty years since Norway’s first female priest was ordained and one hundred years since the first milestone towards this was reached. This happened on 24th April 1921 when a woman, Marta Steinsvik, was permitted into the pulpit of a Norwegian church.

To understand the public discourse in Norway in the first half of the twentieth century, the author, theologian, Egyptologist, translator and linguist, Marta Steinsvik (1877-1950) must not be overlooked. Her biography paints a picture of one hundred years of Norwegian cultural and spiritual history. Through legal battles, her writing and speeches she challenged the patriarchal culture which dominated psychiatry and medicine, the courts, prison service and education. In 1921 she was the first woman to preach from the pulpit during a church service. She admonished the Catholic church’s sexual moralising and even challenged it in court; Steinsvik’s book on the topic, St Peter’s Keys to Heaven, was withdrawn for a time by the Norwegian Attorney General. She also criticised the mistreatment of those imprisoned for treason, psychiatry’s self righteousness and the abuse of animals. An unhappy romance with Rudolf Steiner led to her forced committal to Gaustad Asylum in 1910, where she was diagnosed by the medical chief, Johan Scharffenberg, as chronically insane.

During the 1920s she travelled around, giving lectures based on the anti-Semitic canard, The Protocols of the Elders of Zion. At the same time, in Norway’s leading newspaper, Aftenposten, she advocated for the enforcement of the Norwegian constitution’s ‘Jew Clause’, which denied Jewish people and Jesuits entry to Norway. For this reason, it is difficult, in the present day, to embrace her as the pioneer she in fact was in many arenas and that’s why many people would like to see the Oslo street named after her renamed.

This biography documents the – for most of us – surprisingly big influence occultism had, deep within circles that called for rational politics and on writers who were occupied with the merciless exposure of socially constructed mysteries. Even so, before this biography, it has been difficult to understand the underlying effect of movements and schools of thought such as clairvoyance (psychometry), telepathy and various kinds of esotericism on central public figures. The struggle against animal abuse, inside and out of medical research, the campaign against unnecessary vaccination, warnings of toxins in food – these topics, which preoccupied Marta Steinsvik in the last years of her life, show not just that she was a restless soul with various interests, but that she, in certain cases, took advantage of her clear analytical abilities to set a new agenda. This biography has, in the same way, altered cultural history for us.

Marta Steinsvik clashed with all the conventions and standards…She demolished the fantasy of the social state even before it was a reality, by landing outside of all rubrics. Ingeborg Solbrekken has given this lonely crusader a worthy and well-documented life story…Solbrekken records an important piece of Norwegian history which has never previously been told, about a unique and in every manner transgressive woman…We are most grateful.

Marta Steinsvik caused a stir in her lifetime. Her biography has also received a lot of attention and wide coverage in the press…A dissenter and a dissident who was at the centre of many of the spiritual conflicts of her time – such a person is difficult to pin down in a biography. Non-fiction writer, Ingeborg Solbrekken, attempts to do just this in 656 pages and succeeds on all the principal points…Solbrekken’s particular merit is showing that metaphysical trends did not just represent an alternative religious universe, but delivered a spiritual basis for important political campaigning…Marta Steinsvik’s philological work with ancient texts, from the Hermetica and Indian heroic poems to the Bible, is rather reminiscent of some renaissance-humanists’ learned attempts to unite Christianity with Platonism and Ancient Egyptian religion…A Cross and A Sword is a biography which is difficult to put down.