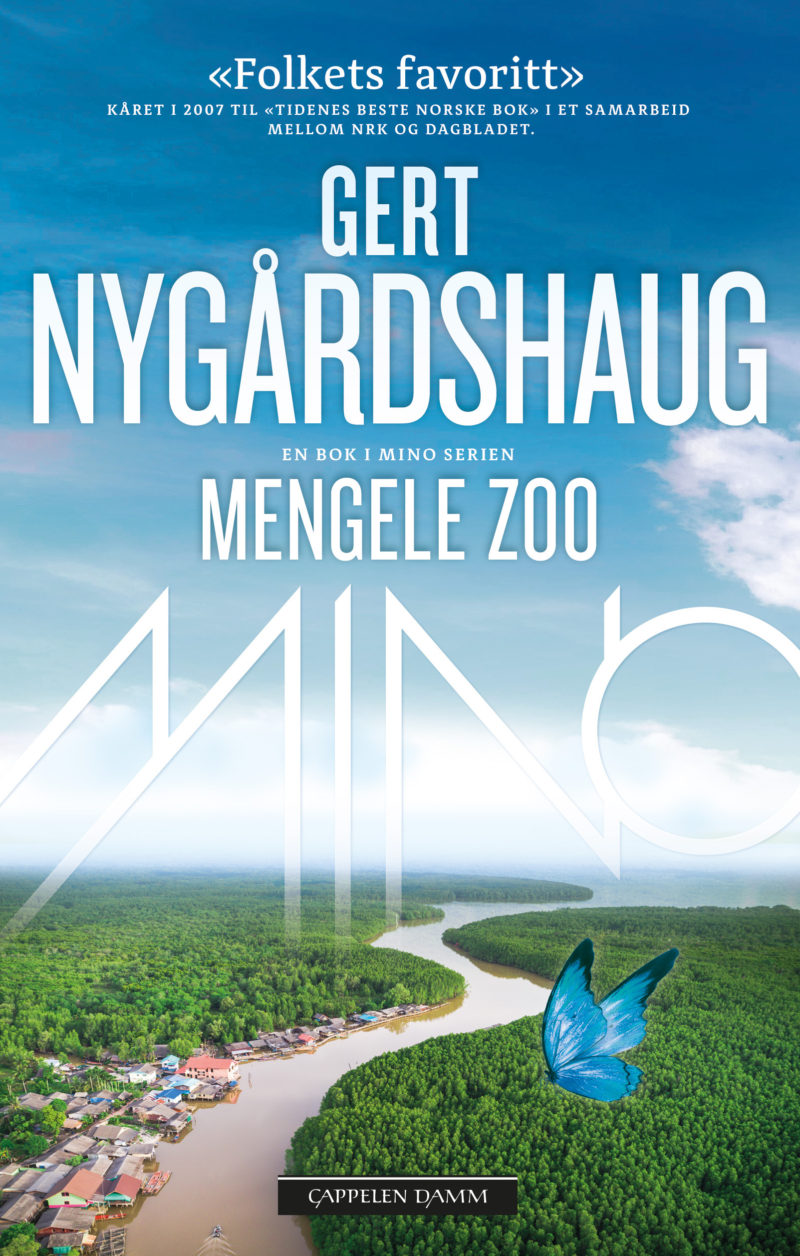 "Mengele Zoo" is a Brazilian expression describing a situation out of hand.

Mengele Zoo has sold more than 400.000 books in Norway

Mino was born in the South American rainforest. He loves the scents, the sounds, the diversity of life. To make a living, the young boy preys on the rarest of the beautiful butterflies together with his father. Their small community is disturbed by the major petrol companies wanting to exploit the rainforest.

One day when returning from his daily hunt, Mino finds his family and friends massacred.

He flees into the unknown parts of the rainforest alone. Isidoro; a travelling magician finds him and adopts him; training Mino to become a young «mago». They form a spectacular show they take to small villages on the Latin American continent for years.
Mino will become a student years later, emphasizing on biology and eco-philosophy. At the university he finds allies and together they create the dangerous Mariposa movement which aims to direct the world’s attention to the destruction of nature caused by international companies. They begin systematically assassinating the leaders of the companies which commit crimes against the environment and genocide in the poor world.

Gert Nygardshaug masterfully combines lush narrative capacity and imagination with a high voltage drama describing Latin American reality. The book deals with themes such as environmental concerns and imperialism; and based on Nygardshaug ́s experiences when living in the Latin American rainforest.

A powerful and disturbing book; the best I have read so far this year.

A beautiful, thrilling, wise, insightful and adventurous novel. Keeping the reader on the edge until the very last page

Leaving an amazing feeling after reading, the sensation one gets after having read something very, very good

A sharp contribution to the debate about the brutal environmental degradation, leading to difficulties in surviving for human beings (...)
Nygårdshaug's intense story, with some contours of a saga, depicts the brutality of both sides- the investigators and the terrorist. Nevertheless, the sympathies lie with Mino and his tireless struggle against the destructive actions of capital and power. A novel which convinces with it´s thoughtfulness

-Beautiful and impossible (...)
Literary suspense with a lush language and an exciting plot (...)
Well written, Nygårdshag manages to convey in an excellent way how the world is viewed by a terrorist.

The novel by Gert Nygårdshaug tells with a very tight but never frenzied pace a breathtaking story, which captivates and wraps the reader, bringing us around the world in a vortex of tension and violence. What most upsets us leads to reflection, becomes a vehicle, thanks to a solid and complete narrative structure- characterized comme il faut in every single detail, of vibrant political issues, in the broadest sense of the word, that appears less visible, more subtle and implicit, but precisely for this reason even more brutal, domineering, suffocating, intolerable (...)
Do not miss this for any reason

The magical realism gives way to the violence of a thriller. Because Mino, through the Mariposa movement, will become an eco-terrorist.
Thus, Nygårdshaug, with great narrative ability and skilful use of suspense, points at the complexities of a global problem that can no longer really be ignored

With narrative skills combined with perfect thriller management, Nygårdshaug manages to build a novel that admirably blends the narrative with the ability to bring attention to an international, political challenge

A lovesong for a planet we should respect
(...) Gert Nygårdshaug writes a colorful, vivid and lush story, brings us closer to the secrets of the rainforest, to the richness and magnificence of the most beautiful butterflies in the world, tells tales, magic spells and dreams (...)
INFERNO VERDE is an attack on crimes against nature, the destructive mechanism that sucks the marrow of the poorest areas and at the same time most important to the survival of the planet. Because the battle against the destruction of the green lung is not just about South America, it's an emergency involving everyone

Gert Nygårdshaug writes a story containing all he colors of the rainbow.
A story that, with its flapping wings, generates spells for the destruction of evil and to leave alive, in the enchanted south of the world, the majestic forest, its secrets and its butterflies.
Must be read! It helps to understand better the meaning of our current, unfortunate, dangerous and sad time.

Nygardshaug gives the first part of his novel the charm of a fairy tale, emphasizing the dream to raw realism. The second part, on the other hand, is powerful. It is a cry of revenge for Mother Earth against the unscrupulous actions of man

Nygardshaug turns the spotlight on a global problem, laying the foundations for a fundamental reflection on the use of natural resources, through a story that has fantastic elements in addition to the presence of raw themes such as exploitation, murder and revenge