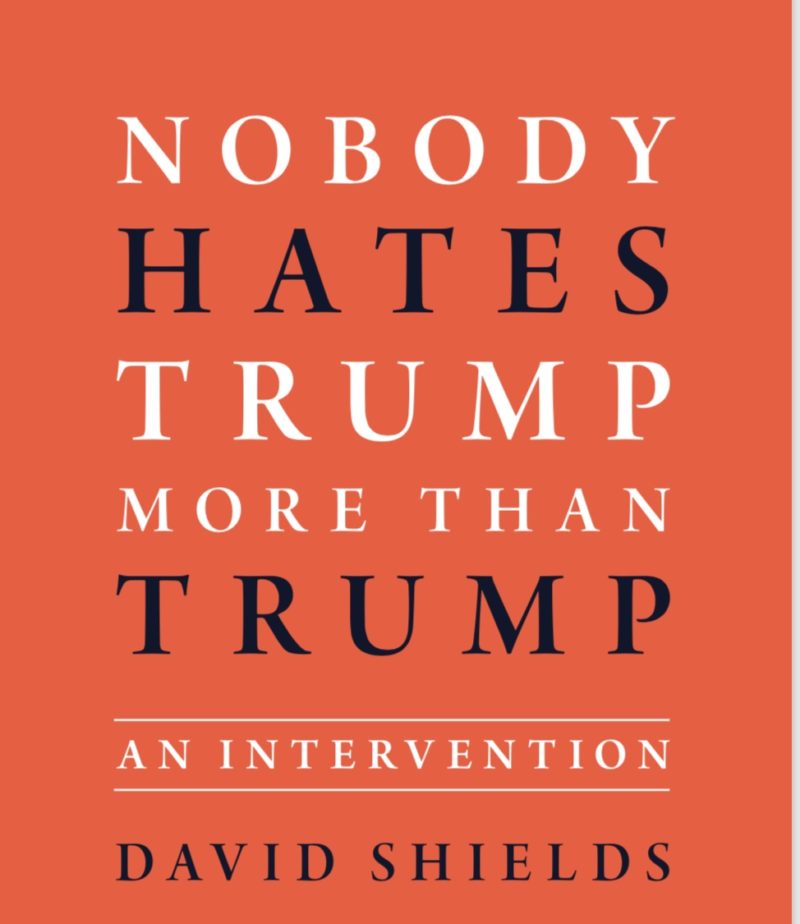 Nobody hates Trump more than Trump- an intervention

In NOBODY HATES TRUMP MORE THAN TRUMP: AN INTERVENTION (Thought Catalog; October 2018), New York Times bestselling author David Shields deconstructs the idiot- savant-autocrat at 1600 Pennsylvania, his fan-fiction base, and the emotional needs/moral failures of the city, country, and world that created him.

NOBODY HATES TRUMP MORE THAN TRUMP: AN INTERVENTION is at once a psychological investigation of Trump, a philosophical meditation on the relationship between language and power, a satirical compilation of the “collected wit and wisdom of Donald Trump,” and above all a dagger into the rhetoric of American political discourse—a dissection of the politesse that gave rise to and sustains Trump. The book is organized into six chapters and 60 subsections and gets increasingly harrowing in its focus, moving from childhood to sex to media to virtue- signaling to chaos theory to “apocalypse always.” The book’s central thesis is that we have met the enemy and he is us.

I wasn’t going to read it because I’m so tired of anti-Trump shit, but I love the book, agree with everything Shields nails about this moment. It’s the best summation of Trump I’ve come across. Such a relief to see someone get it. I was reading passages to my millennial Communist ‘Trump is going to kill us all’ bf, who didn’t say anything, just rolled away

Shields’s most ‘accessible’ book and probably his best. Impossible to put down—a polyphonic bricolage that is both absolutely of this moment and deserving of a burial in a time capsule to be opened at another age. The clinical depression of our current historical circumstances is never absent from these pages, but while reading them, one does so with exultation at seeing Trump and his era so exactly skewered

No other book approaches the man and the situation in quite this way: the problem isn’t out there; it’s in us. A book (deserving of a wide readership) for those who have a bit of trouble with the left and a ton of trouble with the right. I love the artfully and skillfully prismatic way it gets at the man and our collective arrival here

As a person on whom nothing is lost, who goes on seeing after he shuts his eyes and never stops thinking, Shields has experienced the age of Trump at a level that many folks couldn’t bear. Here we have a record so rich in insights, reflections, and found absurdities that it is a model for consciousness under siege in any period, not just our own

The best book, so far, on the political and cultural implications of Trump’s presidency. Shields has the widest range of curiosity of any American writer I’m aware of, and he almost never wastes your time. He nails what’s off-kilter and crazy about Donald Trump and the political psychosis he represents at least a hundred times, and in dozens of insightful ways. Shields is good enough, in this book, to earn the designation of being the writer most likely to be picked up and murdered should either right- or left-wing fundamentalists take power in the United States. This is a designation that hasn’t been conferred on an American writer since Philip K. Dick. What I’m saying is that Shields is that good. He is one of a very small group of true 21st century writers worthy of the tag, and I salute him as a master

Shields is the most unpredictable and exciting writer we have in America at the moment, the most startling and innovative

A sobering, nuanced, and—at times—brutally funny—psychological investigation into why Trump resonates with all, even the people who hate him

A mesmerizing study of power, how it isolates, how it infantalizes, how it amplifies our collective fears

A compelling book offering something to offend nearly anyone

Nobody Hates Trump More Than Trump has something new to say.

David Shields’ Nobody Hates Trump More Than Trump is not the predictable (and too easy) Trump-bashing book you might expect from the title.

Nobody hates Trump more than Trump- an intervention

(Original title: Nobody hates Trump more than Trump- an intervention)