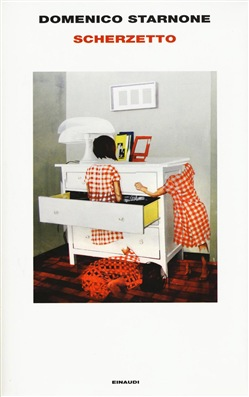 Imagine a duel. Two males are facing each other, blood of the same blood. The taller one is over seventy years old; he is a famous illustrator and has lived in absolute solitude for many years. The shorter one is a four-year-old nuisance with a vast and precocious vocabulary: a grandson he has seen maybe twice and who has been entrusted to the care of the grandfather for three whole days. The boy’s parents have left for a convention (or maybe they simply needed some time to understand if their matrimony has come to a dead end). Four walls and a balcony, and seventy-two hours are the boundaries of this sharp-cutting story, the perfidious and comical clash between an old man and a boy, a grandfather who is tired and distracted and a small, petulant and highly vivacious gendarme. In this match between the two – with alliances, rival- ries and pranks that aren’t always funny – life itself is mirrored in every form: past life and potential life; the harsh and mocking life of Naples, which welcomes the man back after many years; and the life of the house, which seems to slowly reawaken, full of echoes and ghosts. Anger at growing old and faith in the future cohabit in this small, compact and exemplary chamber “scherzo”, in which Domenico Starnone continues to explore family dynamics without exception, with humanity and irony, nailing us down with a smile on the shadowiest side of ourselves.