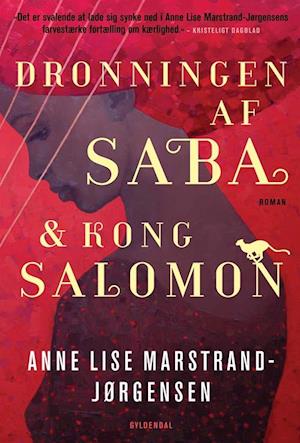 The story of the Queen of Sheba and King Solomon can be found in the Bible, the Koran and the Ethiopian epic, Kebra Nagast. Three thousand years ago, on the border between myth and history, two people meet. The will both make a huge impact on their societies, to the extent that we still recognise their names.

Makeda is a hunter and villager in the kingdom of Sheba, which stretched from Ethiopia to Yemen. Only just grown, she sets out on a dangerous journey to find a father she has never met, which ends with her being received into the King of Sheba’s council.

In Israel, the young Soloman takes over the throne from his father, King David, and must prove that he can follow in his powerful father’s footsteps. He is successful in making Israel into a powerful trading nation and stregthen’s the country’s links to surrounding territories.

Solomon’s kingdom is the gate to both Damascus and Rome, and Makeda decides to travel to Israel to make a trade agreement which will secure her kingdom’s wealth and security.

Soloman’s expansions have drained the state’s treasury, so Makeda’s lavish gifts are welcome. Soon, Solomon dreams of marry this powerful women from Sheba, and adding her to his already full harem.

The Queen of Sheba & King Soloman is a big novel of love, power, conflict and alliances – and about how far we will go to achieve our goals.

Driven by flowing, poetic language and a facination with female ambition and strength. You willing let your self ride in the slipstream.